A week has passed since the release of version 13.4 beta 2 and Apple released a new release. Today, developers can install the third beta version of iOS 13.4 and iPadOS 13.4. These versions of iOS and iPadOS can now be installed on iPhone and iPad, with a beta profile.

In the first beta versions, changes were made to the bottom panel of the Mail application. Added a new CarKey API, new Memoji stickers, keyboard shortcuts in the Photos app for the iPad, and more. Let’s find out what developer beta 3 has been added to iOS 13.4. You can install the update through the menu “Settings”> “General”> “Software Update”.

For iOS 13.4 beta 4 in this assembly, the following innovations:

The material is complemented

Note that one of the most important changes is universal shopping. Thanks to the new update, developers can sell versions of their applications for macOS and iOS in one purchase. Apple claims that this feature will be launched in March 2020, that is, the final iOS 13.4 will be released to the public in the spring.

Check out our article to find out all the news about the new version of iOS 13.4. 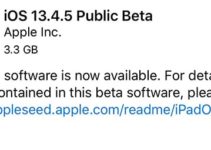